It rained most of the night at Refuge Cove but by morning only the odd shower still lingered.  While a bit damp, it did make for a pretty start to the day. 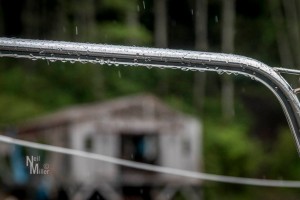 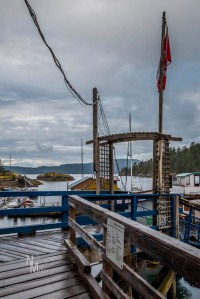 Day 9 itself didn’t quite go as planned. Our intended destination was Walsh Cove on the opposite end of West Redondo Island from Refuge Cove. However, once we got there, three failed attempts at getting our anchor to catch resulted in our decision to come up with a plan B. I considered Roscoe Bay and Laura Cove but ended up deciding on Prideaux Haven. When we got into Prideaux Haven the wind was whistling through and would have made for a very bumpy night. So in the end we ended up “next door” in Melanie Cove where we had anchored two nights before. However it is such a pretty little cove that a second stay was certainly not a hardship.

The breeze died in early evening and the boat was pretty still overnight.   We weighed anchor around 9 am and set off for Grace Harbour in Malaspina Inlet. Once we got away from a couple of the islands near Prideaux Haven we picked up enough wind to sail. With the sails up we managed a broad reach until we got to the mouth of Malaspina Inlet where we dropped sail and started motoring up the channel.  The end of Grace Harbour opens up into a beautiful anchorage. With the anchor set we were ready to enjoy our last afternoon in Desolation Sound.

After lunch we dinghied ashore and hiked about a mile along a trail to a little lake. With lily pads and an abundance of dragon flies it wast quite pretty. 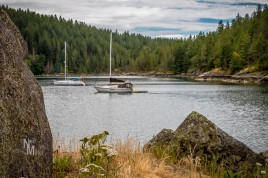 Grace Harbour – Baraka Too (our charter boat) is on the left 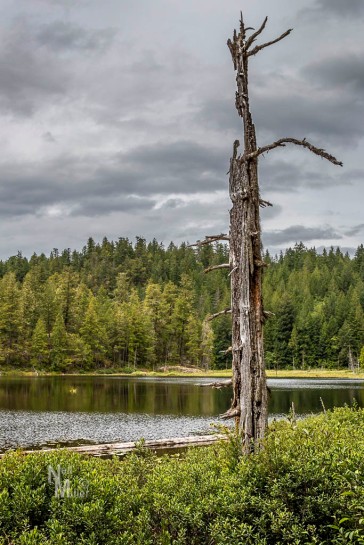 Lake that is a short hike from Grace Harbour

The next morning we left Grace Harbour, headed up Malaspina Inlet and out of Desolation Sound to Lund, starting our return to Nanaimo. Located on the Sunshine Coast, north of Powell River, Lund is a great destination. Tied up to the Government wharf we had easy access to a restaurant, bakery, and the Lund Hotel (with Pub).   We took advantage of the warm, sunny afternoon to enjoy a beer on the deck at the Lund Hotel and a delicious dinner at The Boardwalk Restaurant.  The harbour also provided a great sunset view. 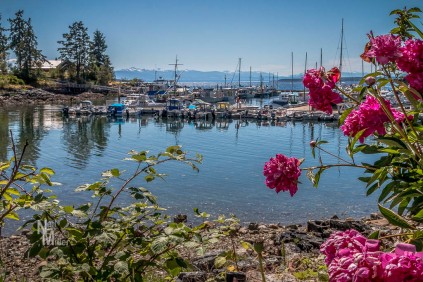 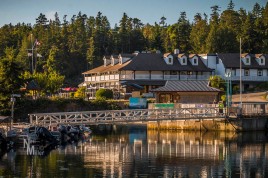 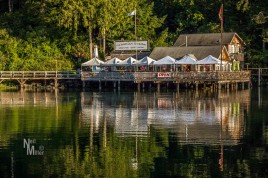 The Boardwalk Restaurant at sunset 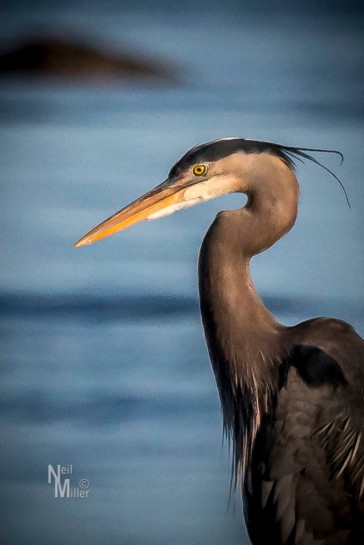 Pender Harbour was our destination for the next day. Upon tying up to the dock at what I thought was Garden Bay Marina we were politely told we couldn’t stay as it was for members of the Royal Vancouver Yacht Club!  A few minutes later we were safely tied up “next door” at the “correct” Garden Bay Marina. A blues band was playing an afternoon session at the pub at the head of the dock. After showers we listened to the music from our cockpit as we enjoyed happy hour. When the band finished playing around 5:30 the pub emptied out fairly quickly. We headed up and enjoyed a nice dinner on the deck overlooking Garden Bay.

The final full day of our charter was the best sailing day of the trip (actually one of the only full sailing days of the trip). While the wind started quite light it soon picked up to about 10 knots and we “flew” across Georgia Strait on a starboard tack right into Nanaimo Harbour.

We tied up at a mooring buoy at Newcastle Island and enjoyed a sunny and warm afternoon. For dinner we took the dinghy to the Dinghy Dock Pub. We enjoyed good food with a great view of Nanaimo.

It was up early the next morning to tidy up the boat and finish packing.  Slipping the mooring buoy, we set off to fuel up and return to the charter base.  Our boat, Baraka Too, was chartered from Nanaimo Yacht Charters.   This was the second time I had chartered from them and I was once again very pleased with both the boat and the service.

It seemed that all too soon our trip was over, but what a great trip it had been. 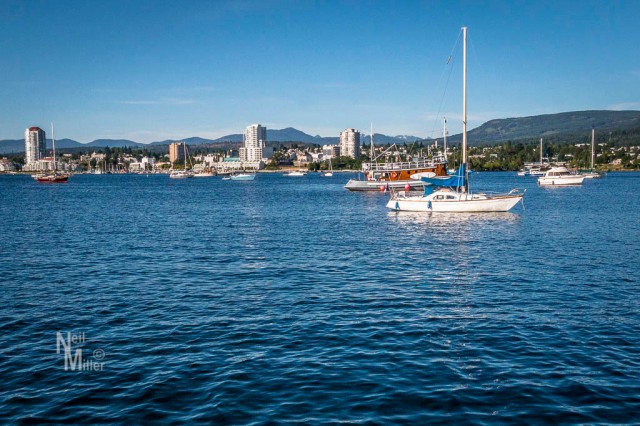