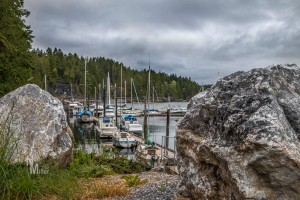 Day 5 started with rain. While refuelling the boat I regretted that we hadn’t done this the afternoon before when it wasn’t raining.  Soon we were on our way in wind and rain out of Jervis Inlet and up Malaspina Strait to Sturt Bay towards the north end of Texada Island. To our delight it was a beautiful little bay.  The local yacht club has a dock reserved for transient moorage which is where we tied up. About a 20-minute walk from the Marina is a well stocked grocery store which is a great spot to re-provision. While there we learned that one of the local landmarks, the hotel, had burned down the week before. With it went a pub and restaurant which had a great reputation.

Just before sunset the sky cleared a bit in the west, even though it was still raining. The result was some incredible light on the boats in the marina along with a double rainbow. 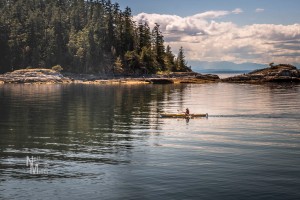 The rain continued much of the night but we woke to beautiful blue skies. Following a hearty pancake breakfast, we cast off to continue our trip north towards Desolation Sound. We had a fun morning of sailing before the wind dropped and we motored the rest of the way to Midway Cove in Copeland Islands Provincial Park. Here I had my first experience anchoring close to shore then rowing to shore with a line from the stern of the boat to tie to a tree. This prevents the boat from swinging in a big arc as the wind changes direction.

Anchored with stern line to shore

Midway Cove was a very picturesque anchorage which we shared with only two other boats. Both left early in the morning leaving us totally alone for a couple of hours before we too weighed anchor and departed.

Only two other boats shared the anchorage with us 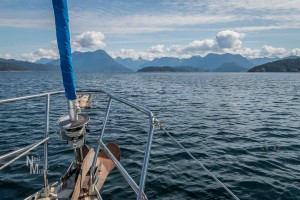 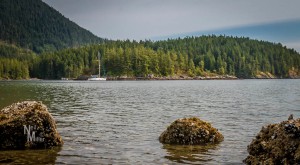 Our route on Day 6 took us to the end of Malaspina Peninsula and into the area known as Desolation Sound. After rounding the peninsula’s tip we proceeded down Malaspina Inlet, then up Lancelot Inlet to Susan Islets. Given that this sailing trip was a birthday gift to my wife for her last birthday, it only seemed appropriate that we would would visit this anchorage, given its name. Save for a few seals and some mergansers, we had the cove to ourselves. 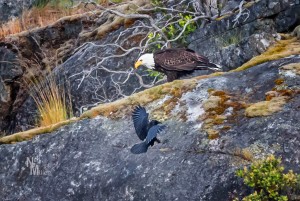 A warm, slightly overcast morning greeted us the next morning. On the rocks nearby, a Bald Eagle was eating his morning catch. With only a short way to go we took our time over breakfast. Mid-morning we hauled up our anchor and we’re off.

Along our route we enjoyed the sight of Bald Eagles, a flock of Turkey Vultures, and seals sunning on rocks. 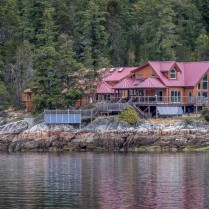 Home with a view

Shortly after noon we entered Prideaux Haven and continued on to Melanie Cove where we dropped our anchor. We spent another relaxing afternoon with views of mountains, forests, and water. 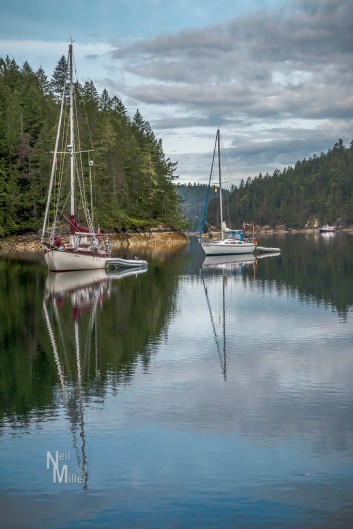 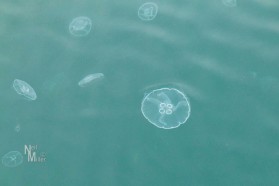 An abundance of Jellyfish in Melanie Cove

In spite of a few showers overnight, Day 8 dawned with partially blue skies. With only a short distance to go we were in no big rush to leave. A little after 10 we had hoisted our anchor and set off for Refuge Cove, about 10 miles away. 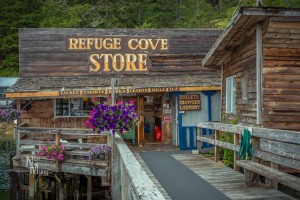 Refuge Cove is a bit of a funky little place. The area around the harbour is owned by a Co-op who lease space back to some private businesses. Basically you can venture no further than the top of the dock where the General Store is located. The rest of the area is private. At this time of year only the fuel dock and the General Store are open. The little restaurant and an art gallery were closed. The store was fairly well stocked for the few provisions we needed. As well, for 5 bucks you could have a shower with no time limit – a welcomed experience after several days of anchoring out. 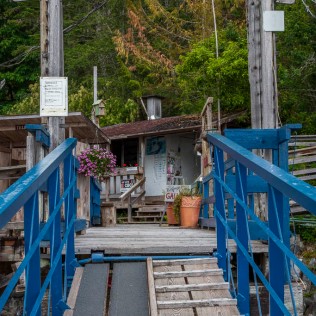 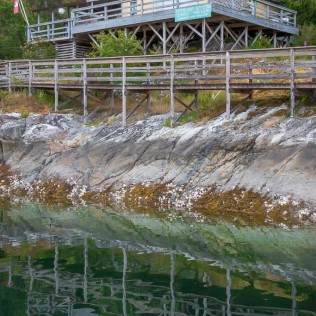 As I had some work to do which required wifi access I purchased 24 hours worth online (the marina doesn’t have its own wifi). It’s a good thing I got my work done in the afternoon as long about 7 pm, when it seemed the generator for the community was shut down, the wifi went down. So much for 24 hour access. I suspect that it was a good thing that I didn’t pay for shore power with our moorage as that probably would have gone down as well. It would appear that while Refuge Cove may be an OK place to get fuel or to re-provision, if you want to stay overnight and stretch your legs with a walk, or have reliable power and wifi, then this is probably not the place to go.

The rain started again in the afternoon and continued into the night. There is nothing quite like falling asleep all snug and warm in a sailboat with the sound of rain pattering on the deck over your head. Sometime in the night the rain ended and we awoke to a mixture of cloud and blue skies.