Sleep last night was made a bit difficult by a band that started playing in the Pub next to the tent area at 10 pm and didn’t quit until 3:30 am. It sounded like I got more sleep than a lot of our group. The campground was celebrating “Christmas in August” and I don’t know if this was part of that celebration but it certainly seemed strange to be creating that much noise late into the night with so many children, and adults for that matter, trying to get some sleep. Most campgrounds have quiet time from 10:00 pm to 7:00 am – apparently not this one.

Morning brought heavy dew on the tent so it was pack up a wet fly time. Otherwise it was a nice morning, a little warmer than some of the past mornings.

We left the campground into a headwind on a bumpy road. We turned off that one onto another bumpy road. Soon we came to our old friend Route 132. Hallelujah! Smooth, wide shoulders again. The prescribed route had us on and off Route 132 onto side roads for much of the day. Elaine suggested, and I heartily agreed with her, that if we were going to be fighting headwinds she’d rather do it on a slightly busy road with generally good shoulders than rough side roads with no shoulders and little traffic.

From Sayabec to Ste-Florence the headwind was pretty strong so we took turns drafting each other. We made fairly good time this way.

In Amqui we stopped for breakfast #2. It was decent but bacon and eggs is pretty straight forward. 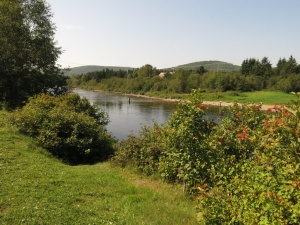 For most of the day we followed the Matepedia River. The Matepedia is apparently a world class fly fishing river. It was quite beautiful to ride along, especially since we came across several covered bridges along the way. 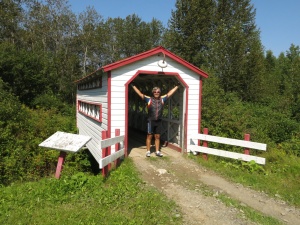 I’ve turned into a giant!

In Ste-Florence we stopped for pictures at the giant salmon chair. Then we crossed the road to buy drinks to go with our PBJ sandwiches. 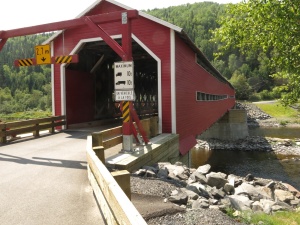 Past Ste-Florence there was a lot of downhill. The winds seemed to swirl around a bit so that sometimes the headwind became a sidewind or a tailwind but most of the time it was in our face. As a result we had to pedal downhill. There’s just something not right about that.

At Matapedia we stopped at a roadside ice cream stand. I had a milkshake washed down with an iced tea (since I was thirsty). A short distance further we turned onto Highway 11 to cross the Rivière Restigouche. On the other side we entered New Brunswick. Province number 7!

As we entered Atholville there was a Dairy Queen. Naturally I was forced to stop for a Blizzard!

Two kilometres further we were in camp after a 142 km ride.

1 Response to Day 59 Farewell to Quebec