This morning was quite cool under a cloudless sky. A heavy dew meant packing up a wet tent fly yet again. The sun felt warm once it came up.

Coming out of camp we had a very steep but short hill to climb: a precursor of what was to come later in the day. The route was fairly flat and with a tailwind for the third day in a row it was a most enjoyable ride. Once again we were following the St. Lawrence River as the road wound through picturesque farmland. This was our last full day of riding in Quebec. The province has more than lived up to its name, La Belle Province!

Our first stop was in the village of Bic. What an absolutely beautiful spot: gorgeous landscaping around nice houses and grand looking inns and B&B’s. At the far end of town we enjoyed cinnamon buns and beverages at a fantastic bakery.

In Rimouski we followed bike paths a long ways along the waterfront. Eventually we came The Empress of Ireland Memorial where they also had a submarine on display (we didn’t tour it although I have toured other subs in marine museums). As I was straddling my bike to take a picture of the lighthouse at the site my bike started to slip. In grabbing for my bike I dropped my camera and it went down hard. While it still appears to work, the zoom feature appears to be toast. 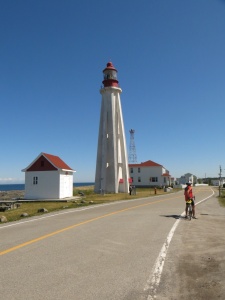 Just before Ste.-Flavie we stopped at a seafood restaurant for fish & chips. Even though the place was a bit of a tourist trap the food was pretty good.

Most of our route since leaving Quebec has been on route 132 which has proved to be very bike friendly with wide, often smooth shoulders for the most part. Coupled with the great scenery it quite possibly could be the best highway we’ve ridden on so far. Alas all good things come to an end and just past Metis sur Mer we left Route 132, turning towards St.-Damase. 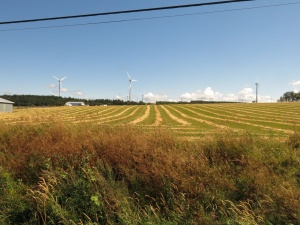 Nearing St.-Damase we had several very steep hills to navigate. The first one topped out at a 16% grade which really got the ol’ heart rate going. As a point of reference, for those familiar with St. Albert, Boudreau Hill is probably a 6% to 8% grade.

We conquered the hills and shortly after arrived at our campground at St.-Damase. The tenting area is on the side of a little lake and is quite nice other than being about a kilometre from the showers. You almost need another shower by the time you get back to the tent.

Our ride today was an awesome 135 km.