Checking out the feeder

A number of friends have finally shamed me enough to get off my but and update my blog/website. It’s not that I haven’t been doing anything worth writing about, rather it’s that I’ve been busy doing those things and just haven’t taken the time to write about them.  So on this fine Sunday, December afternoon it seemed like a good time to sit on the patio, watch the birds come and go to he feeder, and reflect on the past several months. My apologies in advance if this comes off like a “My Summer Holiday” essay we used to have to write on the first day back at school. 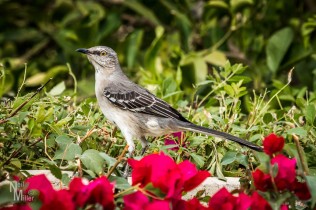 In mid-July we attended the annual convention of a fraternal organization to which I belong.  We attend pretty well every year and certainly weren’t about to pass up on a chance to visit Baltimore, one of our favourite cities. The harbour area, where the convention hotel was located, is beautiful with lots of activities and sightseeing to be had. It was great to reconnect with friends we have made across Canada and the US who we only see once a year. This summer it was also a chance to share memories of a dear friend who passed away earlier in the year.

Among all the convention activities I did manage to get away for some photographic excursions. 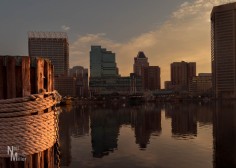 A few weeks later I went backpacking with a great group of friends on the Skyline Trail near Jasper, Alberta. The hike was to have taken 4 days with the start at Maligne Lake. For several reasons it ended early. By the end of the second day I was developing blisters similar to what I experienced a year earlier on the Berg Lake Trail. I decided it was prudent to take advantage of a 14 km “bailout” trail the next morning rather than to carry on for another 2 days. As it turned out, we awoke next morning to a snowfall. I departed with 2 friends while the balance of the group decided to remain in camp for a while to see what the weather was going to do. By late morning it became clear that the pass, The Notch, which was the next part of the trail, was deep in snow and would be too treacherous to attempt and they too opted to follow us out the escape trail. The first two days of the hike, however, were beautiful and offered lots of great photographic opportunities. 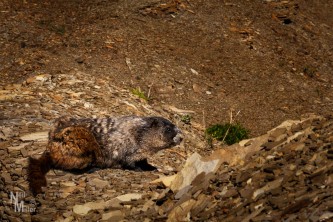 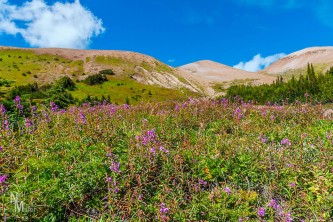 I returned to Jasper National Park in early September to catch a couple of days of the Tour of Alberta cycling race. This year, for the first time, it included a mountain stage.  It just seemed like a good excuse to go camping for a couple of nights at the Snaring River campground, watch some cycling, and poke around Jasper National Park with my camera.

Drops on a leaf 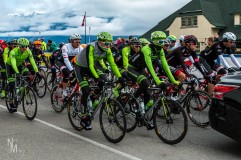 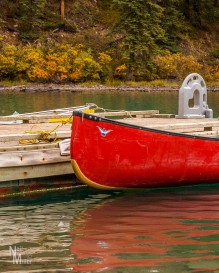 A few days later I was back in Jasper NP:  this time to go canoeing on Maligne Lake. This was my first experience with canoeing and I loved it. I had the added benefit that the 3 friends I was with were all avid fishermen (I am not) and I was able to experience the gastronomic delight of dining on Brook Trout literally pulled out of the lake and into the frying pan. Absolutely delicious! 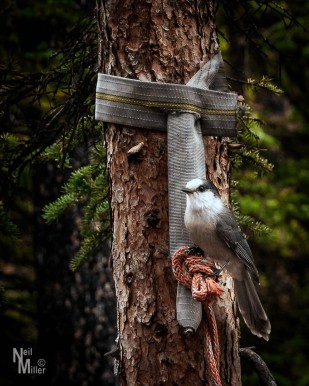 James with his catch

The end of September saw me once more in the Rockies, this time at Mt. Assiniboine. This time it was on in the company of a photographer friend, David Buzzeo, ( Buzzeophotography.com ) and mountaineer Dan H. who I have also known for

Dan and David in front of Mt. Assiniboine Lodge

over 30 years. Dave is a brilliant landscape photographer and I was able to enjoy some one-on-one coaching with him.  Mt. Assiniboine is in BC, just over the border with Alberta, and south of Banff/Canmore. We flew in by helicopter, camped for 2 nights in the campground there, went on several hikes, enjoyed afternoon tea at Mt. Assiniboine Lodge, and hiked out (28 km) on the final day.  The first morning after our arrival we awoke to snow.  Fortunately the weather lifted enough that we were able to get in a decent day of shooting. Both David and Dan had been to the area many times and were very familiar with where the good spots were for photography. The area is beautiful and it’s easy to see why they have been back many times.

View on flight to Mt. Assiniboind

Waterfall with Larch trees above

The Canadian Thanksgiving weekend saw me in Chicago running my 16th marathon. While my race time was quite slow I thoroughly enjoyed the route. Chicago is a great city and the marathon course showcases some very picturesque neighbourhoods.  In addition to the marathon I got in a bit of sightseeing. 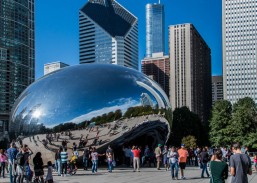 Upon my return from Chicago we loaded up the car for our trek to our winter home in California. I will deal with some photographic excursions in our first month or so in the desert, including an amazing trip to Zion National Park, in future posts.