Day 54 Battling The Wind To Quebec

The light rain over night let up a little before I got up so I was able to take my tent down without getting the whole thing soaked. The fly of course was wet but by now I am storing it in a separate plastic bag. The rain started up again as we were cooking breakfast.

With breakfast done and the truck loaded it was time to get the full rain gear on and get cycling. We rode I. The rain for the first 30 km or so. By the time we got to Champlain the rain had stopped. There we found a cupcake cafe and enjoyed a cupcake with an espresso. 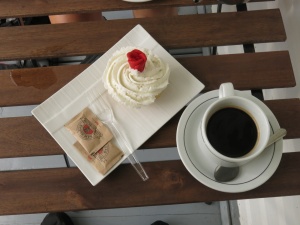 That was pretty much our only cafe stop for the day. A little past Champlain the headwind started to get a little stronger. By 50 km it was getting to be hard work. We stopped at one point for a PBJ and a rest break. We continued to ride along the St. Lawrence River through picturesque villages and farms for most of the afternoon.

By 60 km the riding was getting quite exhausting. Just as I thought I was going to need another rest break Elaine pulled around in front to pull me. That was just the break that my legs needed. We continued to alternately pull each other, changing the lead every 2 km for most of the afternoon.

In Donnaconna we stopped at a convenience store for a drink.

On the outskirts of Quebec we had to climb a very steep hill just after we passed under a very long and very high train trestle. I can’t imagine going over the trestle in a train! We had been warned about the hill but not until we got there did we find out just how steep it was. Fortunately it wasn’t too long a hill. 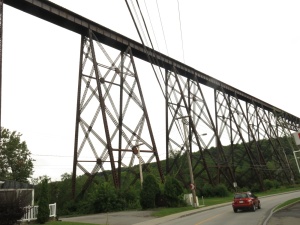 After making our way around a long twisty detour at a construction site and though some busy streets, we arrived at the residences at Laval University after a 145 km ride.  I have been very fortunate to be riding with Elaine. We get along well together and while I do most of the navigating she usually catches me if I make a wrong turn following Bud’s map. As a result we have never really got lost. An added bonus in the Province of Quebec is that she is quite fluent in French. That has made it very easy for me.

It was pizza night with a birthday cake to celebrate Mike’s birthday. After dinner a group of us took the bus to Old Quebec to take in the free Cirque du Soleil rehearsal. Unfortunately it was cancelled due to strong winds so we ended up checking out a couple of pubs to continue the birthday celebration.