My sleep was rudely interrupted around 3:00 am by very loud thunder, bright lightening flashes and rain pelting down hard on the tent. The storm sounded like it was directly overhead. I’m sure the lightening was spectacular but I didn’t feel like sticking my head out of the tent to see. Just as the rain would start to let up again another gust of wind would hit, another crash of thunder would accompany another flash of lightening and the skies would open up again. All I could think was we were going to be packing up camp in pouring rain.

Needless to say that was the end of my sleep right when I wanted it most. I wanted to be well rested for our second century ride in as many days. Then at 5:00 the storm ended as fast as it started. My alarm went off at 5:15 and when I stuck my head out a few minutes later the skies were already clearing.

By 7:00 Alberta + 1 was on the road. Our galley crew is cooking tonight so there was a bit of pressure to get in as early as we could.

At about 50 km into the ride we stopped at Whitemouth for some chocolate milk and a snack. Yukon Greig was just leaving town as we arrived. Craig and Becky arrived soon after we did.

Further down the road we caught up with Aussie Greg and Megan at the store in Rennie. Time for another chocolate milk and a sandwich. There was a little porch with some chairs that we took full advantage of. As we were sitting there Craig and Becky rolled in. 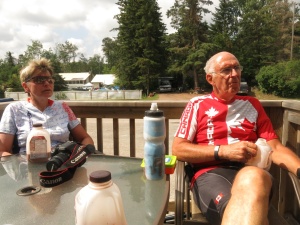 Back on the road we needed to make a pit stop. While there Greg, Megan, Becky and Craig all rode past.

By now it was getting very hot and humid. The horse flies swarmed around us as we rode, blighting through clothing. We could have happily done without their company.

The road had no shoulders and fortunately there was very little traffic. It was quite a pretty ride: the granite outcroppings told us we had left the prairies and were now in the Northern Shield. By now we were playing leap frog with Craig and Becky as we would catch up and pass them, then watch them go by when we were stopped, then pass them again.

Just before White Hawk Lake we stopped at an interesting combination of convenience store, gift shop and plumbing store. By now I was in need of a sports drink. As we sat in the porch Craig and Becky, now joined by Danny the Rocket, arrived. It was quite relaxing sitting there and getting harder to get back on the bike but eventually all good rest stops must end.

A short distance further we joined the Trans Canada Highway. What a dream! Suddenly we had wide, paved, smooth shoulders to ride on. Just a few kilometres more and we arrived at the Ontario border. Entering Province number 5! 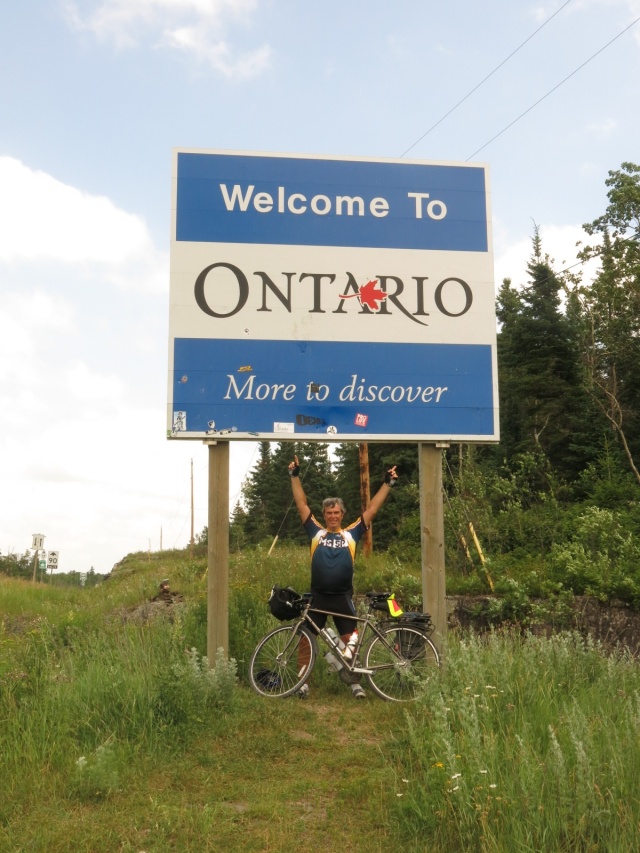 The next 50 km was a dream ride. Rolling hills, paved shoulders and a tailwind! We flew along to Kenora. By 4:30 we arrived in camp and set up our tents as a light shower moved through.

Even though the distance was 178 km and it was our second century ride in a row at the end of a six day stretch of riding, today was a great day. I really enjoyed the ride. Not even my butt hurt today. With all the little hills I stood up to pedal fairly frequently and that really seemed to help.

Tonight our crew made mac’ n cheese with spinach salad. Canned peaches and chocolate cookies were desert. A simple meal but very good.

We do have cell service here after enduring days of no service in Manitoba (MTS has got to be the worst!). We also have Wifi. I wandered down to the office after dinner to get a good signal but there wasn’t enough band width (too many people on) to upload photos so I’ll try updating my blog in the morning.

Tomorrow is a rest day here in Kenora.

Lake of the Woods