This morning we met up with some of the other people, who will be going on the same riverboat cruise as we are, in the lobby of our hotel.  We were all going on one of a couple of tours today:  Susan and I were doing a city tour and the rest were doing the Keukenhof Gardens tour that we did yesterday.

The reason for meeting in the lobby was to catch the free “pick-up” shuttle that the tour company offered to take you to their office and departure point.  It was a great idea but in reality, what took us 15-20 minutes yesterday by tram and a short walk, today took us about 45 min by the time the bus waited for people and made a couple of stops to pick up passengers (traffic was also heavy).  And in the end we had to walk about as far from where the shuttle dropped us off as we walked yesterday to the tour company office.

At the tour office we met up with our friends Rick and Linda who arrived yesterday and are on the same cruise.  The city tour itself I would rate as mediocre.  It was 3 hours we did see many parts of Amsterdam.  There were two stops:  a 5 minute photo op at a windmill and a 45 min stop at a diamond factory.  The tour at the diamond factory seemed to consist of a presentation to a room packed full of people about how diamonds are cut.  We listened to about 30 secs of the tour and decided to cut out.  We exited, you guessed it, through the gift shop for the diamond factory!  What I found disappointing about the tour was the lack of information about Amsterdam.  Most tours I’ve been on have generally been full of information about the area, its history, and other stories as well as information about a lot of the buildings and other sites you are passing.  Granted our tour guide translated everything she said into 4 languages but basically it consisted of identifying a number of buildings we were passing with not much other information.

Statue of Rembrandt with windmill in background

After the tour we took a little stroll through the Red Light district.  In the early afternoon there was nothing happening of the nature that has made the district famous, but it was still interesting to wander through just to see the buildings. 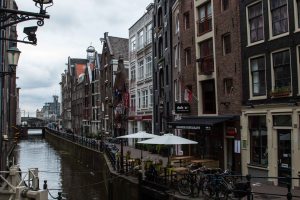 We stopped for lunch before catching the tram and getting off at a little shopping mall in hunt of a warmer sweatshirt for Susan.  It has been quite chilly here, apparently unseasonably so and another warm layer seemed to be in order.

Back at the hotel we relaxed for a bit before heading out the front door and catching a canal tour right in front of the hotel.  The one hour boat trip was pretty good – probably a better tour overall than what we had this morning.

And that pretty much was our day save for a pretty good dinner at an Argentine Steakhouse near the hotel.

This entry was posted in Travel and tagged Amsterdam. Bookmark the permalink.