I thought I was going to a bonspiel.  Apparently I was only partially right.

At 6:30 am last Friday morning I loaded my suitcase, curling stuff, and camera bag (in case I had time to take a few photos) into the car and set out for Dave’s house.

I was at Dave’s by 7:00 am.  With my stuff transferred to his car we set off for Banff and the 50th annual Blue Goose Men’s Bonspiel.

As many of you know, I am a member of an insurance fraternal organization known as the Honorable Order of the Blue Goose, International.  The organization is comprised of men and women who are employed in some capacity in the Property & Casualty insurance industry.  With only a couple of exceptions, I have been going to the annual bonspiel every year since 1978.

This year the event was returning to Banff where it had been held for many years.  About 10 or 12 years ago the bonspiel moved to Vancouver and the Richmond Curling Club.  In the intervening years it had been held twice in Regina and once in Calgary and the remaining years in Richmond.  In honor of the 50th anniversary of this bonspiel it was once again going to be held in Banff at the new curling facility that had been built since we were last there.

We had an uneventful drive down and arrived at the curling rink with plenty of time to spare for our first game at 12:30 pm.  The other half of our rink, Rod and Morey, had arrived an Banff a little earlier than us.

For the past number of years I have generally only curled once a year:  at this bonspiel.  I go for the fellowship of the event without expectation of actually winning anything.  In fairness, although we have never won an event, we have placed in the prizes some years.  Without going into the gory details, this was not going to be one of those years.  We lost 3 games straight.  While we didn’t curl that badly for a bunch of guys that only curl together once a year (Morey and Rod curl regularly on different teams) we just didn’t curl well enough to pull off a win.  So after our 3rd game at 8:00 Saturday morning we were officially out of the bonspiel.  At least we had time for a leisurely breakfast at Melissa’s Missteak, a Banff landmark.

So what to do now?

Dave suggested we scout out some locations that we could use for a dawn photoshoot the next morning.  My friend Dave retired several years ago and has since pursued his passion for photography.  He has gained his professional designation through the PPOC (Professional Photographers of Canada) and specializes in landscape photography.  He does some amazing work – check out Dave’s website www.buzzeophotography.com for some samples. (Coincidentally, my father was a founding member of PPOC.)

Given that I have so much to learn about photography I jumped at the chance to go on a photo shoot with Dave.  His primary plan was to scout out a location from where we could get some good “reflected light” mountain shots at dawn.  Dave has spent a lot of time in the Canmore and Banff areas so is very familiar with the region.

In Canmore we found a location along the Bow River that would serve our purpose for the next morning.  We then took some photos at Quarry Lake above Canmore before returning to Banff via Lake Minnewanka (and more photos).

We got back in time to catch some of the semi-final games at the curling rink.  Saturday night was the bonspiel banquet followed by watching some of the Brier curling on TV in the hospitality room.

Sunday morning we were up at 5:00 am (did I mention we lost an hour of sleep due to the change to Daylight Saving Time?) in order to get to Canmore in time for twilight.  Another friend and fellow curler, Mark, joined us for the trek. Some of Mark’s amazing photography can be found on 500px.com .

We arrived at our spot by the river while it was still dark.  Dave and Mark both had tripods.  Mine was safely at home!  As a result my handheld shots in the low dawn light were not particularly good.  As luck would have it the sky was pretty overcast so the colors that we hoped for just didn’t materialize.

Our next destination, after breakfast in Canmore, was Johnson Canyon.  After a few stops along the way to take photos, we arrived at the parking lot. 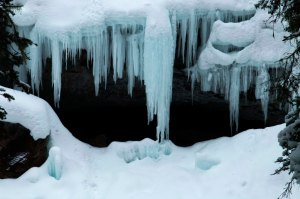 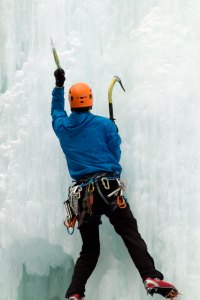 Returning to Banff, we dropped Mark off at the hotel where he had left his car, and headed for home.

What started off as a bonspiel weekend ended up being so much more.  It was a tremendous learning opportunity to spend time with Dave and Mark.  Through seeing how they treated the same subject matter, both in the taking of the photos and in post-production,  made me realize just how much more I have to learn.

All-in-all it was a tremendous bonspiel weekend!