A Tale of Two Weekends

“It was the best of times …” But here I must end my brief plagiaristic stroll as to continue would inject an element of untruth into today’s epistle.  The truth be known, the past two weekends were pretty good ones with forays into two different art forms … the art of fine wine and the art of opera. 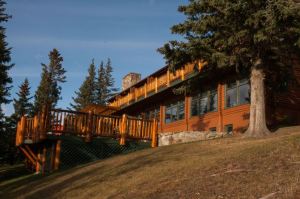 A week ago we spent the weekend in the Jasper area at the Overlander Mountain Lodge for the annual Opimian Society Relaxin’ in the Rockies event. The Opimian Society is primarily a wine-buying cooperative with about 20,000 members across Canada.  About 8 times a year they send out an offering of wines from different regions of the world.  In total over 500 wines are offered each year and members can purchase as many or as few as they wish.  In addition to the wine offerings, local chapters hold a number of wine tasting events throughout the years.  Over the years (I have been a member since 1981) we have enjoyed many fine wines which are not available locally.  Additionally we have enjoyed countless wonderful wine tasting dinners.

Anyway, back to the wine weekend!  Saturday morning, just before setting off, we heard that a section of Highway 16 (the Yellowhead Highway) was closed due to a train derailment at Gainford.  Checking the internet, I discovered if we continued on the road we would take to the kennel where we were dropping off our dog we would eventually run right on to the detour route.  Much of this road I had never been on before and it turned

out to be quite a scenic drive. After a lunch stop in Edson we arrived at the Overlander Mountain Lodge, just west of Hinton.  The lodge is perched up on a hillside, overlooking the Jasper National Park gates a few kilometers further west.  The main lodge, with its huge glass windows, commands a spectacular view of the mountains.  We checked in and were soon settled into our room in one of the cabins adjacent to the main lodge.

At 6:00 the reception started hors d’oeurves and a sparkling white wine from Chile.  Dinner lived up to the Overlander’s reputation for fine food.  The menu was as follows:

Dinner was absolutely delicious and the wines paired very well with the various courses with one exception.  The Domaine Villabea had a very strange flavor and, judging by the number of bottles on the other tables that were not finished off, I suspect there was something wrong with the entire case.

Dinner was followed by port and cognac while sitting around the fireplace.  Overall it was a great evening of wonderful wines, food, and company.

The Opimian festivities concluded the next morning with a champagne brunch.  Following brunch we bade farewell to friends, both old and new.

We had elected to spend the Sunday night as well at the lodge which meant we did not have to drive home after the champagne brunch.  We spent the rest of the morning relaxing around the fireplace in the main lodge.  The Overlander does not have TV or phone in the rooms but does have WiFi in the main building so we were able to connect with the world as we enjoyed the crackling fire. 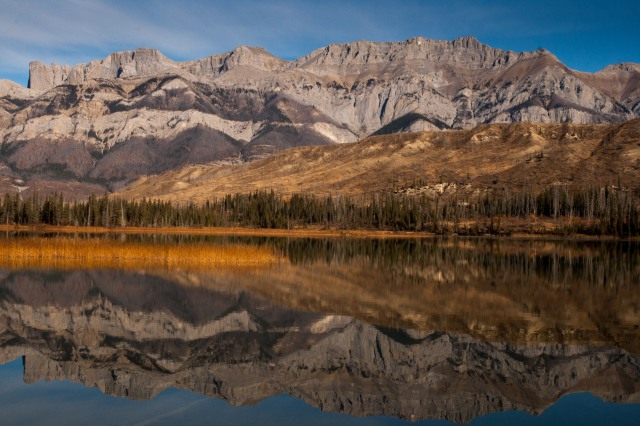 Early in the afternoon we decided to drive into Jasper to stroll around on the streets before having an early supper.  Driving to and from Jasper I stopped several times to take pictures of scenery and wildlife.  It seems like a long time since I’ve had the luxury of time to make frequent stops as usually when we are driving through Jasper National Park we are trying to make good time on a drive out to Vancouver.

Following a great dinner at the Raven Bistro we returned to the Overlander in time for a spectacular sunset and the end to a most enjoyable weekend. 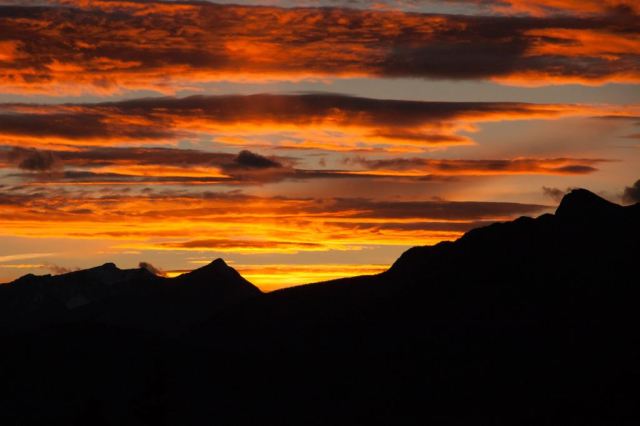 This past weekend was highlighted by opening night of Edmonton Opera’s 50th season.  On tap was Richard Strauss’ Salome, the tale of the beheading of John the Baptist.  And what a tale it was of a very dysfunctional family:  the complex, screwed-up Princess Salome, her nymphomaniac mother, and the lecherous, incestuous step-father (King Herod).  The dance of the seven veils was well done with each layer peeling back to reveal the stages of Salome’s childhood, giving some insight into what she had become.

I liked the set other than a couple of aspects of it.  Most of the set was a raised stage with a “crawlspace underneath” which presumably represented the dungeons under the palace.  However there was so much junk placed in this crawlspace that it virtually blocked any view of the prisoners who were actually crawling around down there.  As well, for the opening scene, there was a curtain of chains hanging down in front of the raised stage pretty much obscuring the action taking place behind it.  While there were a couple of singers in front of this “curtain” your attention was distracted by trying to make out what was happening behind the chains.  Fortunately this curtain was raised for the remainder of the opera.

As it should be in any opera though, it was the singing that excelled in this production.  In particular, German soprano Maida Hundeling as Salome was awesome.  She was here last season and hopefully this isn’t the last we see of her.  Overall Edmonton Opera did a pretty good job on this opera.  While it won’t go down in the books as my favorite opera by a long shot (La Traviata holds that spot for me) I did enjoy it.

This entry was posted in Uncategorized. Bookmark the permalink.