Day 65 Ferrying Off The Island

Our goal this morning was to catch the 11:15 am ferry from Wood Islands on PEI to Nova Scotia. As a result we rode pretty much non-stop the 80 km to the ferry. One thing I can say for certain is that I couldn’t have done that on my old saddle – I would have had to stop to give my butt a break a couple of times in that distance. But with my Brooks saddle I could ride right through.

We arrived at the ferry terminal about an hour before sailing. I bought breakfast #2 at the terminal and had to finish it quickly when they were calling people to return to vehicles to get ready to load. As usual cyclists got to load first. That meant we were first in line at the onboard Cows ice cream shop! 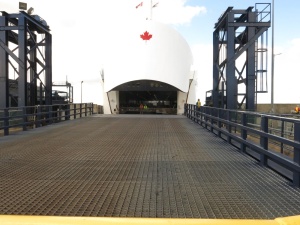 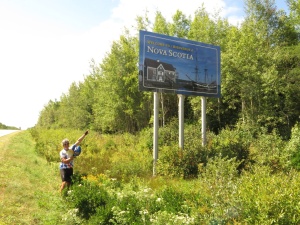 The ferry ride was an uneventful 75 minute trip. Once off the ferry we stopped at the Nova Scotia welcome sign for photos. Then it was off to Pictou for a quick trip around the downtown area and a stop to take a picture of the replica of The Hector. When Susan and I were here about 15 years ago the Hector was under construction using traditional methods. It looked quite different today. The original Hector brought the first 200 Scottish Immigrants to Canada, landing near Pictou.

After viewing The Hector we stopped at a pub for lunch where I allowed myself the luxury of a pint of beer. After all, we only had 50 km left to ride.

The balance of our ride took us through New Glasgow and northeast to our campground at Lower Barney’s River. From New Glasgow onwards the route was hilly and into a headwind. Eventually we arrived in camp after a 137 km ride not including the ferry trip.

In camp we met 2011 TdC vet Keith. A few days ago he rode the Cabot Trail in a counter-clockwise direction (we will be riding clockwise).