How quickly this past week has gone! It’s now only three weeks today until we charge up Signal Hill.

I surprise Elaine by being ready to go before she is. It’s 7:00 am and we are rolling out of the campground on a long ride to Ottawa. This is our last full day of riding in Ontario. After our rest day in Ottawa we will be entering Quebec. It’s amazing to think we will go through the remaining 5 provinces in less time than it’s taken to get through Ontario.

We had a thunder shower overnight but this morning is warm and cloudy. Initially we are riding alongside the St. Lawrence River and the Thousand Islands before turning inland.

Our first real stop is in Merrickville at The Village Bean Coffee House. At a third of the way into the ride I enjoy my latté and lemon loaf. Merrickville is yet another beautiful little toawn with lots of old buildings along the main street. The coffee shop is right across from a business selling fudge and right next door to an ice cream parlor. I show great restraint and resist both temptations. 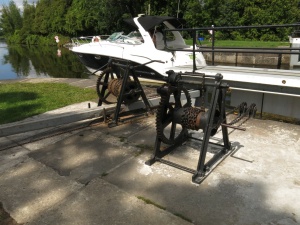 As we leave town we start riding along the Rideau Canal. A short distance from Merrickville we encounter our first set of locks at Burritts Rapids. They are just opening the upper gates, cranking by hand, and two boats are leaving the locks as we get there.

Continuing on, we soon come to Kemptville. As we enter town we see a charity BBQ set up in the parking lot of an OPP detachment. We wheel in and enjoy a delicious lunch where the proceeds are going to Big Sisters. At the other end of town we fortuitously find an ice cream stand where we enjoy some dessert. Larry, Gee, and Yukon Greig all arrive while we are there. It sounded like the BBQ was finished by the time they rode by. By now it was getting quite warm so was nice to relax a bit in the shade to enjoy our ice cream.

After leaving Kemptville we rode into a headwind for most of the remaining distance into Ottawa. We made one more stop for something cold to drink at Kelly’s Landing. The place was built into the side of a hill. At highway level was a gas bar and convenience store.  Downstairs was a restaurant with a nice big deck overlooking the Rideau Canal. 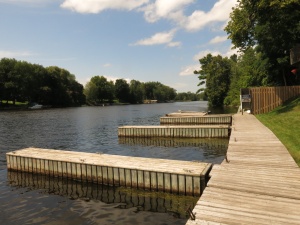 We had a little bit of a hairy ride into Ottawa on some very busy roads but it wasn’t too bad. At Carleton University we found our dorm building, got checked in and had a chance to get cleaned up in air conditioned comfort.

Since the day of the accident, Bob and Irene’s family had been wanting to get together with the cyclists when we were in Ottawa. Tonight we joined them for an informal visit over pizza in a common room in the residence. Two of Bob’s sisters, one from England and the other who is living in New Zealand, along with Bob and Irene’s son and two daughters all with respective spouses and children were there. I think it was good for everyone. There was lots of laughter and stories of Bob and Irene being told. They were very dear to their family and will truly be missed by everyone who knew them.

Later in the evening I used the opportunity to access high speed WiFi to get my blog updated … at long last.