My morning had a wonderful start with sitting in Stan and Sandi’s kitchen sipping coffee and visiting. Stan served up some bacon, eggs, and toast that was absolutely delicious. Around noon they drove me back to the campsite in Tottenham. 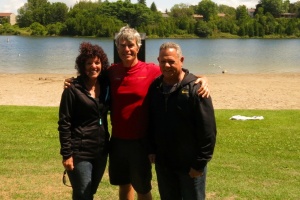 The only real item on my agenda for the afternoon was to clean my bike and install new tires and a new saddle. A few days ago Elaine had called her bike shop in Mississauga and I had ordered 2 new tires (Schwalbe Ultra Marathon Plus) and a Brooks B17 saddle. Her husband had picked them up for me and delivered them when he came to pick up Elaine who is spending her day off at home. 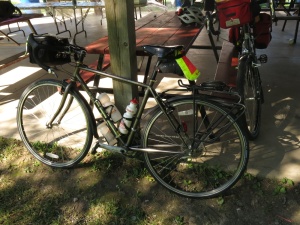 I decided that I’d replace both tires at this point and keep the folding rear tire that I had put on a couple of weeks ago as a spare. Sooner or later the front tire would wear thin so I just decided to put new tires on which should easily get me through the rest of the trip. 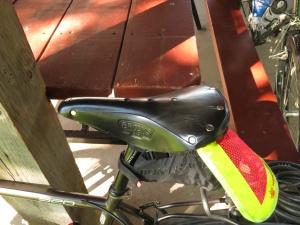 My new Brooks B17 saddle

As for the saddle, since the beginning of the Tour I have been less than happy with the saddle I had on my bike. After 6500 km on the saddle my butt is still fairly sore on every ride. It’s more a case of being constantly uncomfortable rather than being in pain. For the most part it has been tolerable but I finally decided that if I was going to be uncomfortable for another 3000 km I may as well try breaking in a new saddle in the hopes that it would eventually be more comfortable than what I have now. 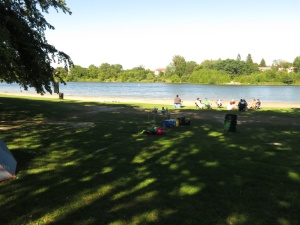 By mid afternoon my bike was cleaned, new tires installed, and my saddle changed. Part way through the afternoon we discovered the power to the truck was off. Further investigation revealed that power throughout the town of Tottenham was off with the result that restaurants, etc. were closed. With my bike finished I thought I would do a test ride into town to see if the power had been restored and if Tim Hortons had reopened in which case I could use their WiFi to publish some blog updates. Unfortunately the power was still off, Timmies was closed and my plans were thwarted. I’m not sure now if I’ll be able to update my blog online until Ottawa. It is turning out that even though many of the campgrounds have Wifi it often is too weak to upload photos for my blog. I’ve had to come to rely on places like Tim Hortons to have a good enough internet connection to accomplish that task. 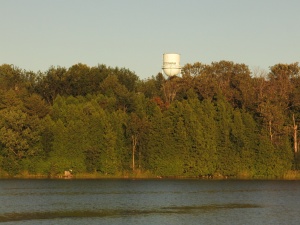 Since the restaurant were closed we managed to use up leftovers from the last couple of dinners. I was pretty much stuffed. Purely for the purpose of wearing off dinner, of course, Rob and I walked into the Rusty Nail pub in town for a couple of pints before returning to the campground to turn in. 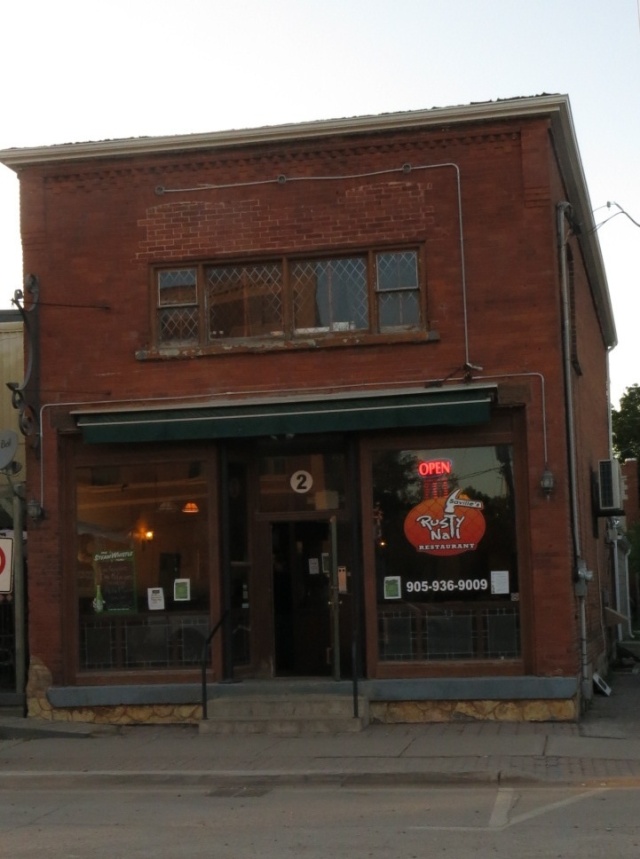 A wee pint to end the day

3 Responses to Day 45 Resting in Tottenham