Day 42 Off the Island

10:15 last night the thunder and lightening started quickly followed by the rain. As the tent started to shake in the wind I was beginning to wonder if it was Dryden revisited. Fortunately the wind dropped after a couple of minutes and the lightening was over as quickly as it started. The rain did last most of the night however. But as usual it had stopped by the time we had to get up. Oh well, one more morning of packing a wet tent fly.

Today is August 1st. It’s hard to believe that 4 weeks from today we will be riding up Signal Hill!

The view over the lake was great as the sun came up. With breakfast done we were on the road by 7:30. Our ride today was short but we wanted to get to South Baymouth early so we’d have time to look around and have lunch before boarding the ferry. Elaine and I rode together, Michel electing to leave later.

The ride was fairly easy. It was primarily farm land that we were riding through and was quite picturesque. At Manitowaning we caught up to Becky who had her second flat in as many days. Within a kilometre we came upon Eric, also with his second flat in two days. We heard later that Larry got a slice in his tire this morning as well. It hasn’t been a good couple of days for tires.

Fortunately our own ride was uneventful and we arrived in South Baymouth at about 10:30. We found a restaurant that advertised fish & chips and figured that would be a great stop. The fish was Whitefish and actually was quite good. And what better to follow up fish & chips than a slice of rhubarb and strawberry pie!

As we were finishing, Myra and Louise arrived and joined us. Louise mentioned that her headset was loose (where the steering column goes through the frame). Over the last couple of days I had noticed that the bottom bracket on my bike was loose and I had been keeping my eye open for a bike shop. I was concerned that it might not make it through to Ottawa where there would be lots of repair shops. According to Google the closest shop is in Owen Sound where we will be tomorrow night. I called them and they assured me that if I got there early enough they would be sure to look after me. Louise also spoke with them and as she is spending tonight and tomorrow with a relative she is hoping that she can get a lift to the bike shop during the day.

While waiting for the ferry Dan, Mike and I walked over to the local museum. We only had about 15 minutes but it was enough for a quick look around. It was quite interesting and would have been nice to have more time. 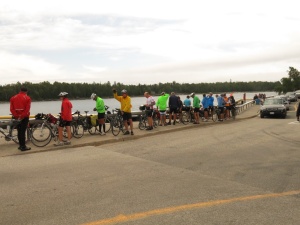 Waiting to board the ferry

By 1:00 pm we were all lined up at the front of the line waiting for the ferry to arrive. Within a few minutes it came around the corner, docked, and unloaded. We were first on to the ferry, parked our bikes and headed up to the cafeteria. A fellow at the next table asked where we had come from and we struck up a conversation with him. He mentioned that the captain and first mate were both friends of his. When Elaine mentioned to him that I was a sailor he asked if I’d be interested in seeing the bridge. Of course I would! A short time later his friend Murray stopped by and said he’d be happy to take us up. The view from up there was great and I even took the helm! (OK only for long enough to take a photo.) 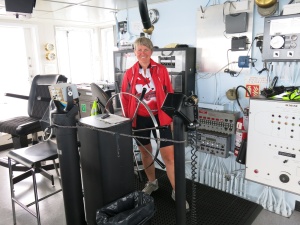 From our arrival in Tobermory we only had a short 6 km ride to our campground. After pitching my tent one of my first tasks was to patch my inflatable pillow. So far it seems to be holding. We’ll see if my head is resting on a rock in the morning.

Our total ride today was a mere 60 km. It was really nice to have an easy day.

There is no WiFi in camp so no blog publishing again tonight.