You know it’s windy when:

This morning was full of promise as the winds seemed lighter and the skies were blue. Michel and I enjoyed a hearty breakfast and packed up our gear. With the winds out of the east we decided to ride north to Bentley then east past Gull Lake towards Lacombe so that we would have a tail wind on our return.

Once out of the protection of the trees in the campground we discovered the winds were as strong as yesterday, if not stronger. We made it to Bentley where I wanted to stop at

Subway to pick up a sandwich for lunch. While I was getting my sandwich Michel popped into the bike shop next door. I joined him and had a look at the recumbent bikes they had on display. The shop is the largest supplier of recumbent bikes in Canada! We had a very interesting visit with the owner talking about bikes and his battle with Lyme disease. Six years ago the fellow was basically on death’s doorstep and he battled back using alternative medicine. He showed us pictures from his low point and through his recovery. You wouldn’t believe it was the same person standing in front of you!

We continued east from Bentley past Gull Lake. By now we were headed straight into he wind and the pedalling was extremely difficult. With virtually no shoulder on the road and wind gusts causing us to veer into the traffic lane we stopped a kilometre or so past Gull Lake. As it really wasn’t safe to continue we decided to turn around and find a spot for lunch. As soon as I turned my bike the other way I could feel the full force of the wind pushing on me. As I threw my leg over the bike the wind was already propelling me forward. Within moments I was doing 25 kph and I hadn’t even pedalled! 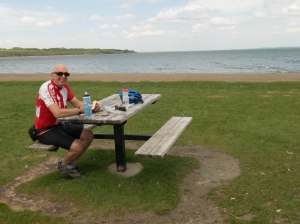 A sheltered table in the Provincial Park on the shore of Gull Lake made a perfect lunch stop. Following lunch we returned through Bentley and slowly made our way south into the wind (which had shifted more SE) back to Jarvis Bay.

Although the strong winds shortened our rides both days from what we would have liked they did give us a pretty good workout. More importantly I got to know Michel and picked up a few tips from him. In a few short weeks we will meet up again in Vancouver for the start of the Tour du Canada!

This entry was posted in Cycling and tagged riding, Tour du Canada, training. Bookmark the permalink.