Cold, showers and very windy is how best to describe the weather that greeted us as we went for breakfast this morning. The question then became how many layers could I put on to stay warm and still be able to move. In the end I wound up wearing 5 layers! I stayed warm but certainly wasn’t over-dressed.

With the announcement to get ready for our tour came the word that we would not be able to visit the castle as winds gusting to 100 kph made it unsafe. Our bus tour did drive by the castle but that is as close as we got. Following the bus tour we were dropped off in the central core of the city for a walking tour.

Despite the weather, we had a very nice walking tour of Bratislava. A very beautiful town, in walking around one could tell that the country didn’t have as strong an economy as the other countries we’ve visited to restore and maintain their old buildings. 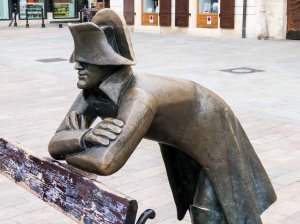 After the tour we stopped at a restaurant where I had a hot chocolate. It was delicious and warmed the insides.

The original itinerary had us leaving Bratislava at 1:00 pm and sailing into Budapest at about 10:00 pm. When we arrived back onboard after our tour we were greeted with the announcement that the high winds had closed one of the locks before Budapest so our departure would be delayed. A further report was to be issued at 5 pm.

During the afternoon the Captain was offering wheelhouse tours.  The one thing missing from the wheelhouse was a wheel.  The ship is steered by a “joystick”.

The 5 pm announcement didn’t reveal any new news. The lock was still closed. Following dinner we received an update that advised we would be spending the night in Bratislava. At 8:30 in the morning we would be bussed into Budapest for lunch and the city tour we were scheduled to take anyway. As soon as the busses were loaded, Skadi would depart for the sail to Budapest where we would be reunited after our tour. Naturally we were disappointed that we would not experience sailing into Budapest at night with all of its lights, but you can’t do anything about the weather. Besides, we would still get our tour of Budapest and see some of the countryside on the bus trip.

Things are looking up

This entry was posted in Travel and tagged Bratislava. Bookmark the permalink.