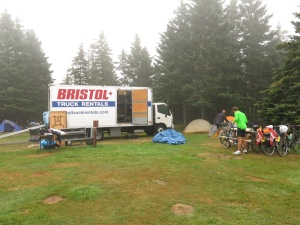 Packing up in the fog 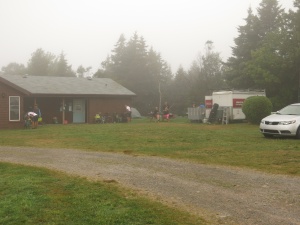 Breakfast was at the trailer

In early morning fog we packed up our tents for the final time. With our bags loaded in the van it was time for breakfast. Our ride to North Sydney was short. We didn’t need to get to the ferry dock to load our bikes on the van until between 1:00 and 2:00 so there was no rush to get away. However, once we had finished breakfast Elaine and I decided we might just as well get going and have some time to look around North Sydney and have a leisurely lunch.

Cresting Kelley’s Mountain in the fog

By 8:30 we were underway on what was a fairly easy ride. Kelly’s Mountain was a bit of a long grind but wasn’t terribly steep. We still had fog as we climbed but it was starting to clear as we descended the other side. The bridge over Great Bras d’Or Channel was a little intimidating as it was fairly long with no shoulder to ride on. Fortunately there was no traffic going our way until we were near the far end and with no oncoming traffic they easily swerved around us.

Our ferry at the dock

We made it to North Sydney in good time after a 42 km ride. At the far end of town we found a great little bakery but they didn’t sell coffee. I bought a cinnamon roll and an oatcake and we backtracked to an Irving station where I bought a coffee. Relaxing behind the service station we overlooked the water while enjoying cinnamon rolls and coffee. I saved the oatcake for later.  While sitting there we watched a ferry depart and a while later one arrived.

While we weren’t overly hungry we thought we’d kill a little more time by having lunch at a nice little restaurant overlooking the ferry terminal. It was really nice just to sit back and enjoy a leisurely meal knowing that we only had about a kilometre to ride when we were finished. I even ordered a beer.

Adam fastening down my bike … I hope!

By the time we arrived at the terminal most bikes were already loaded on the trailer and van. After removing my pannier, handlebar bag and front wheel I handed my bike up to Adam who by now was on the roof of the van. After retrieving my overnight bag I got my room assignment and meal voucher from Bud and my boarding pass from the ferry staff at the gate.

When digging out picture ID to get my boarding pass I noticed that my credit card was missing. After a moment of panic I realized that it must have fallen out of my wallet at the restaurant. Fortunately the restaurant was close and I made a quick trip back. Sure enough they had found it and were holding on to it for me. 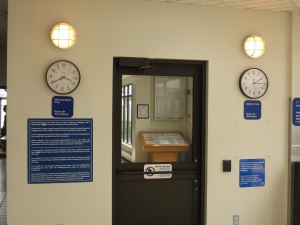 Back in the terminal, since we still had time before boarding, I had a shower and changed out of my riding gear into street clothes. At around 3:30 pm the shuttle arrived to drive us on to the ferry. Once onboard we made our way to our cabins to drop off our stuff. The cabins each had 4 bunks. I was sharing a cabin with Eric, Alain, and Jacques.

Departure was scheduled for 5:00 pm and we were only a few minutes late. 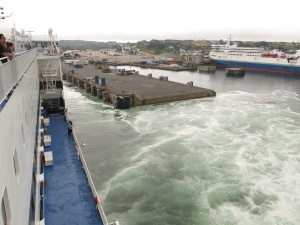 I think we all managed to stuff ourselves pretty well at the buffet supper. I don’t think they made much money on a group of hungry cyclists. Following dinner a group of us retired to the lounge to enjoy a few drinks, share a few lies about the trip and to listen to the entertainer. Overall today was a pretty relaxing day.