Day 47 A Day of Surprises

Our galley crew made breakfast this morning. French Toast and the usual porridge were on the menu. With cleanup and truck loading completed, we were on the road by shortly after 8:00.

The morning air was already warm as we left the campground and cycled through picturesque farmland, forests, and coastal areas.

As we cycled down one country lane we could see Larry and Gee up ahead just getting back on their bikes and riding off. Just as we approached the spot they had left, Yukon Greig was getting ready to leave. There’s a newborn calf there he told us. Sure enough, just inside the fence was a calf still curled up on the ground with the mother licking it. Very cool! 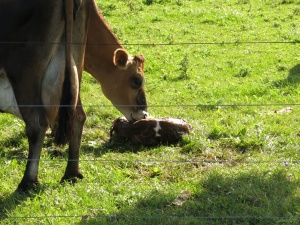 Just before Newcastle we passed Myra and Louise coming out of a McDonalds. About half a kilometre further we caught up to Larry and Gee who had pulled off into what looked like an old Wild West town. There was no one around as we wandered around. It was a strange mixture of Halloween and Wild West. Out front was an old black car with a skeleton wearing a cowboy hat in the back seat. We found out later the place is called Docville and the owner, who lives in the “Hotel” and drives around in the black car, is a descendant of the real Doc Holliday. The place is regularly used for weddings and dances. 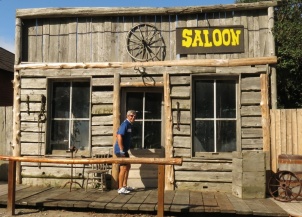 Just going for one sodie pop 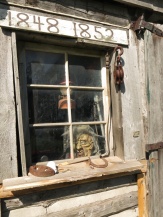 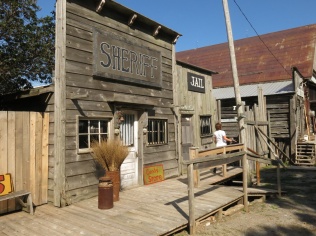 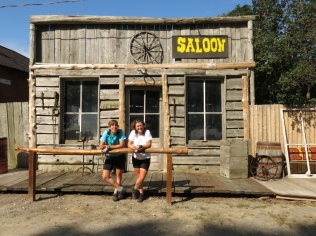 In Newcastle we went looking for a bakery and found Heavenly Treats Bakery and Deli. Louise joined Elaine and me, saying that Myra had stopped to get her hair cut. We all had scones with berries fresh out of the oven with our coffees and tea. They were absolutely delicious. 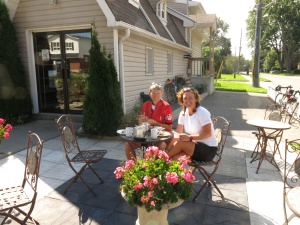 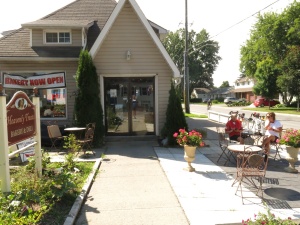 Louise rode with us as we left Newcastle. She mentioned that she wanted to get a picture of herself in a corn field with stalks taller than her so I kept my eye open for an appropriate field. I soon found one and pictures were taken. Just as we were getting ready to leave Myra rode up looking great with her new haircut. 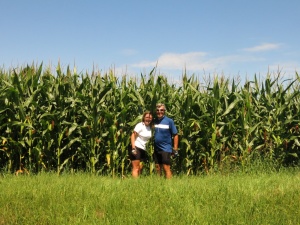 Time for a corny caption 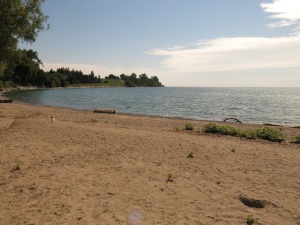 The four of us rode onwards to Port Hope where we stopped to buy chocolate milk ad sat outside to eat our PBJ sandwiches. A short time after we got there Michel, Jacques and Alain arrived. 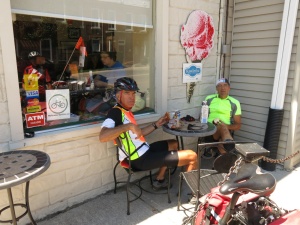 All fuelled up we once again hi the road. Somewhere before Colburg we got separated from Myra and Louise. Port Hope and Colburg both look like very neat places to come back to and explore if I’m ever in the area again.

By now we were riding along a Lake Ontario and periodically got a view of the lake. In Brighton we stopped for some cold drinks then continued on our way. 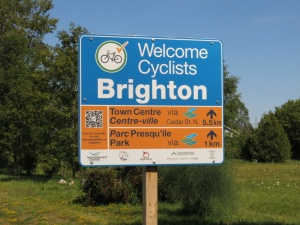 Other than occasionally stopping to take pictures we pretty much rode through to our campsite near Carrying Place. Our distance today was 137 km.

I’m happy to report that my second day on my Brooks B17 saddle. By the end of today’s ride had virtually no sore points and I’ve now had the most comfortable two days of riding since we left Vancouver. 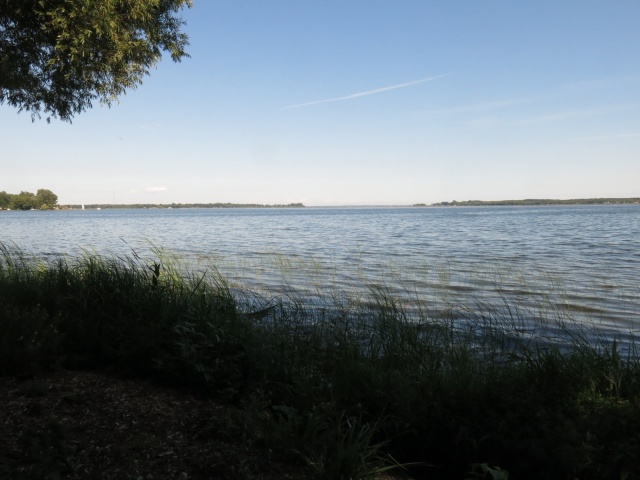