The first few drops of rain have us scurrying for our tents so I can work on my blog early tonight. Again there is no cell service here and although there is Wifi you need to be over near to the campground office to access it. Unless the rain ends early I won’t be posting anything again today.

Our ride today can simply be described as a long slog into the wind.

Our galley crew was on breakfast detail this morning. Even so we had everything cleaned up,the truck loaded and were ready to go shortly after 8:00 am. 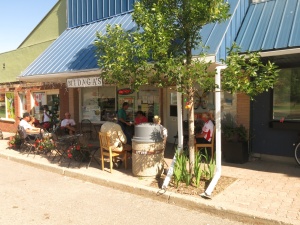 As we rode into Birtle we saw several of our group sitting with a group of other people outside a shop on Main Street. A group of locals were enjoying their regular morning coffee get-together. I bought a chocolate milk and an ice cream sandwich and joined them. There was a lot of laughter as we talked about our trip. It really was a lot of fun visiting with them.

Our only other real stop of the day was in Shoal Lake at the grocery store. I bought another chocolate milk and a bottle of sports drink. The milk I had with a PBJ sandwich and the sports drink went into on of my water bottles that was empty. 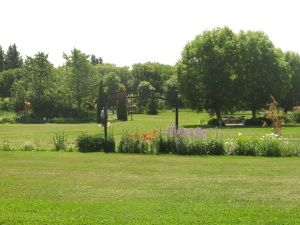 View from the dam in Minnedosa

As we entered Minnedosa Elaine and I stopped at an ice cream drive-in. While there we learned of a shortcut to the campground. Basically we just rode down the street a ways, over the dam at one end of Minnedosa Lake and the park with the campground was right there. It saved us a couple of kilometers following the route on our map through town.

Our total distance today was 133 km.

I pitched my tent next to Mike’s. He already had his up looking very cozy with his “bear-dog” Barry sitting at the door and his dinosaur “Dennis” (from Drumheller) sitting on the roof. Yes, there is a story here. Mike saw a couple of bears on the road into Lake Louise. Both were quite close, especially the second one and as he was riding alone at the time it was a somewhat unsettling experience. Later in Drumheller we joked with him about seeing dinosaurs. A couple of days ago while riding from Regina we saw several stuffed toys along the side of the road. Elaine picked up two of them: one was quite a small stuffed dog and the other a larger one. We also passed a plastic dinosaur that Gee behind us picked up. That evening Elaine presented Mike with the larger one as the closest thing we had to a stuffed bear and Gee presented him with the dinosaur. Mike promptly adopted them and named them both.

Barry at the door, Dennis above the door

We just finished supper when the thunder, lightening and rain drove us to our tents. As 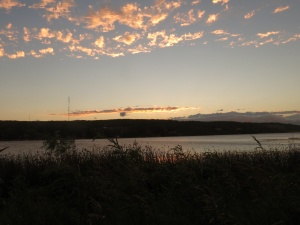 my blog entry for today is now done I think I will crawl into my cozy sleeping bag.