The alarm on my phone gleefully announced it was 5:15 am. I was less gleeful.

As today was going to be another long ride day we had announced that breakfast would be at 6:30. Since we were the dinner crew last night we were also the breakfast crew this morning. So a short time later, with tent packed up, I joined my fellow cooks. Soon the porridge was on and the French Toast ready to cook. Shortly before 6:30 I started frying the first batch of French Toast.

By about 7:45 most people had left, we had things cleaned up and the truck loaded. One last thing I wanted to do before departing was to check my tire pressure. Once again as I was removing the pump fitting from the valve I buggered the valve stem. Flat #4! 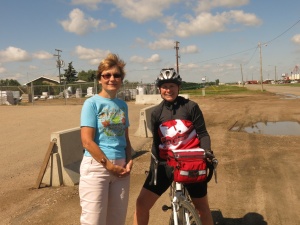 Elaine (R) and her friend Susan

Elaine and I have become known as Alberta +1 (Elaine being from Ontario). It was a beautiful warm sunny morning with a tailwind that was with us for the whole day. It felt like we were flying down the highway with no effort and before we knew it we were rolling into Rosetown – 83 km down the highway! Elaine had arranged to meet a friend there. Sure enough as we rolled into town there was her friend Susan sitting on the tailgate of her truck.

As Elaine visited with her friend we continued on to the A&W where I bought a milkshake to go with my sandwich. Elaine soon joined us followed by Gee and Larry. A short time later Rob and Mike, then the French Connection, rolled in. Another bunch of riders had gone a bit further down the road to the DQ. 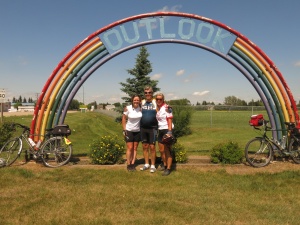 All fuelled up we were soon on our way for the final 60 km into Outlook. The tailwind held and we breezed into town. Everyone, as they arrived, raved about what a great ride it had been. My odometer showed 159 km: one kilometre short of a century (100 mile) ride. 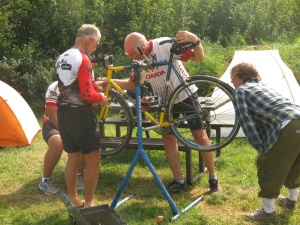 We were early enough into camp that we had lots of time to get tents up and relax in the sun. From our campsite we can see the 3000 foot long Sky Trail bridge, an old railway bridge at has been converted to a foot bridge: the longest in Canada. 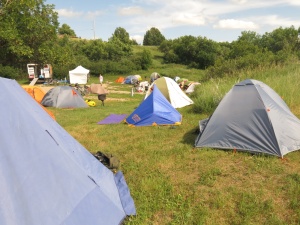 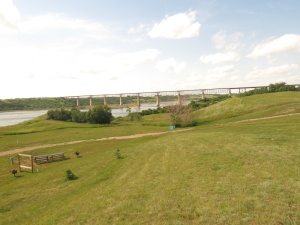 Bill’s sister and her daughter arrived late in the afternoon for a visit. They brought some squares for the group with them. It turns out that his sister Donna used to work with one of my eunning friends, Mary Ann. 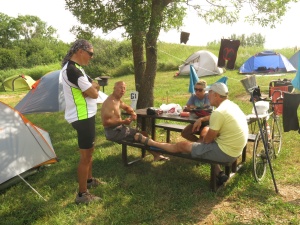 Following another outstanding dinner I had Happy Birthday sung to me by undoubtedly the finest chorus in Outlook. A Dairy Queen ice cream cake along with the squares that Bill’s sister had brought topped off the meal. The DQ cake was absolutely wonderful! How did they know I like ice cream?

It was truly a wonderful, certainly unique, birthday spent with my TdC family. It does occur to me though that I have a bit of a theme starting. Last year I was in Penticton with cycling friends. We rode to Okanagen Falls for ice cream on my birthday, the day before we rode the Gran Fondo. 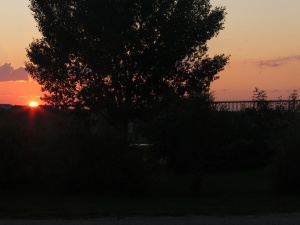 2 Responses to Day 17 A Wonderful Birthday